While we’re excited to welcome in the New Year, we’re also excited to finally share our first anniversary video.

We also wanted to share some highlights from 2021. Getting to spend another year together up in the mountains has been great. James continues to enjoy the winter, with easy access to skiing, and Myke continues to get better at snowboarding.

Valentine’s Day was pretty quiet for us. We went for a hike, came home, and made dinner. Chelsea also got to try out her new winter jacket. 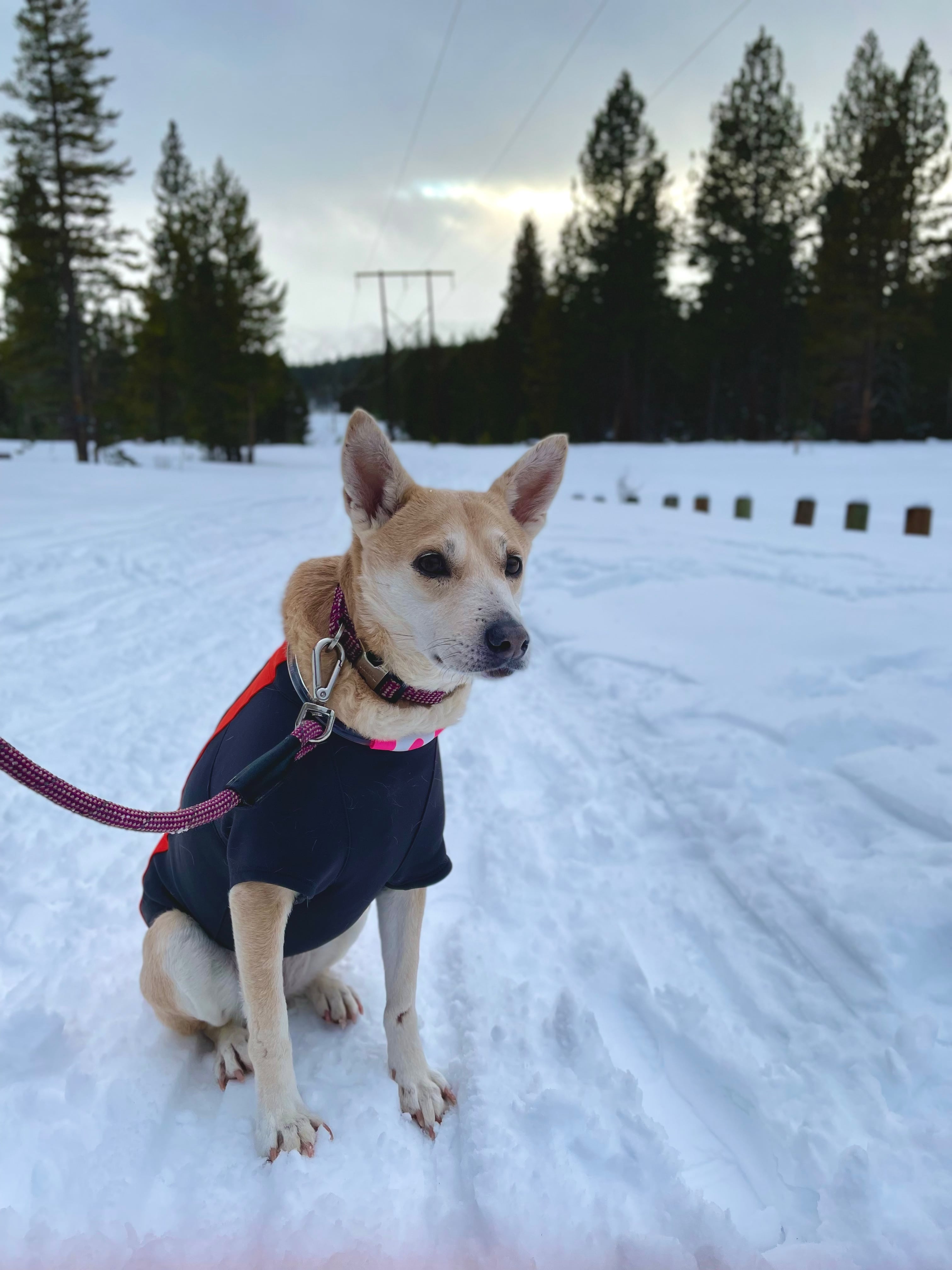 Overall we got in a lot of winter hikes. Geno even came up to visit for a few. It’s fun going to the same places in different seasons, especially with how much snowfall we get here, because things look so different. 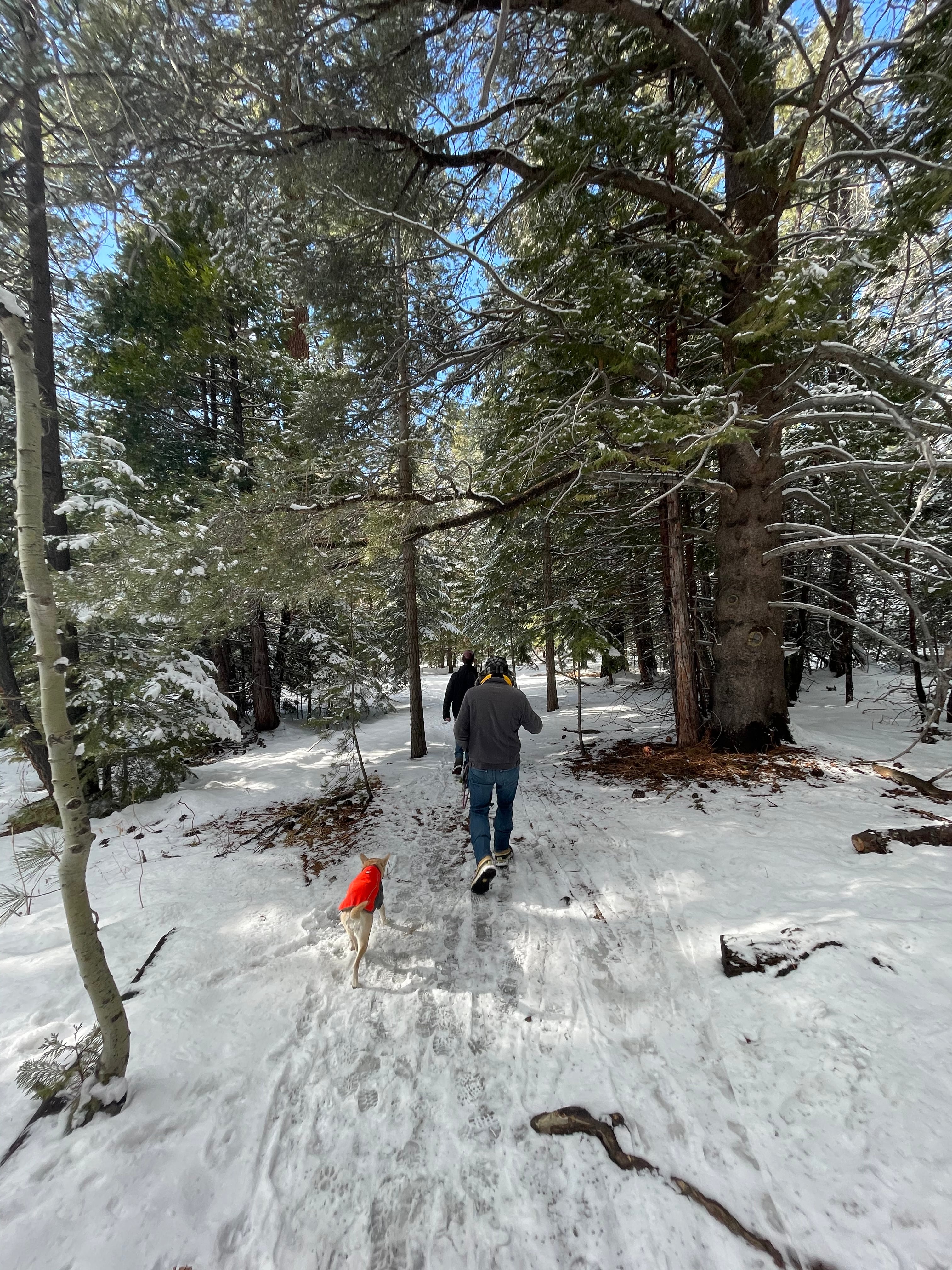 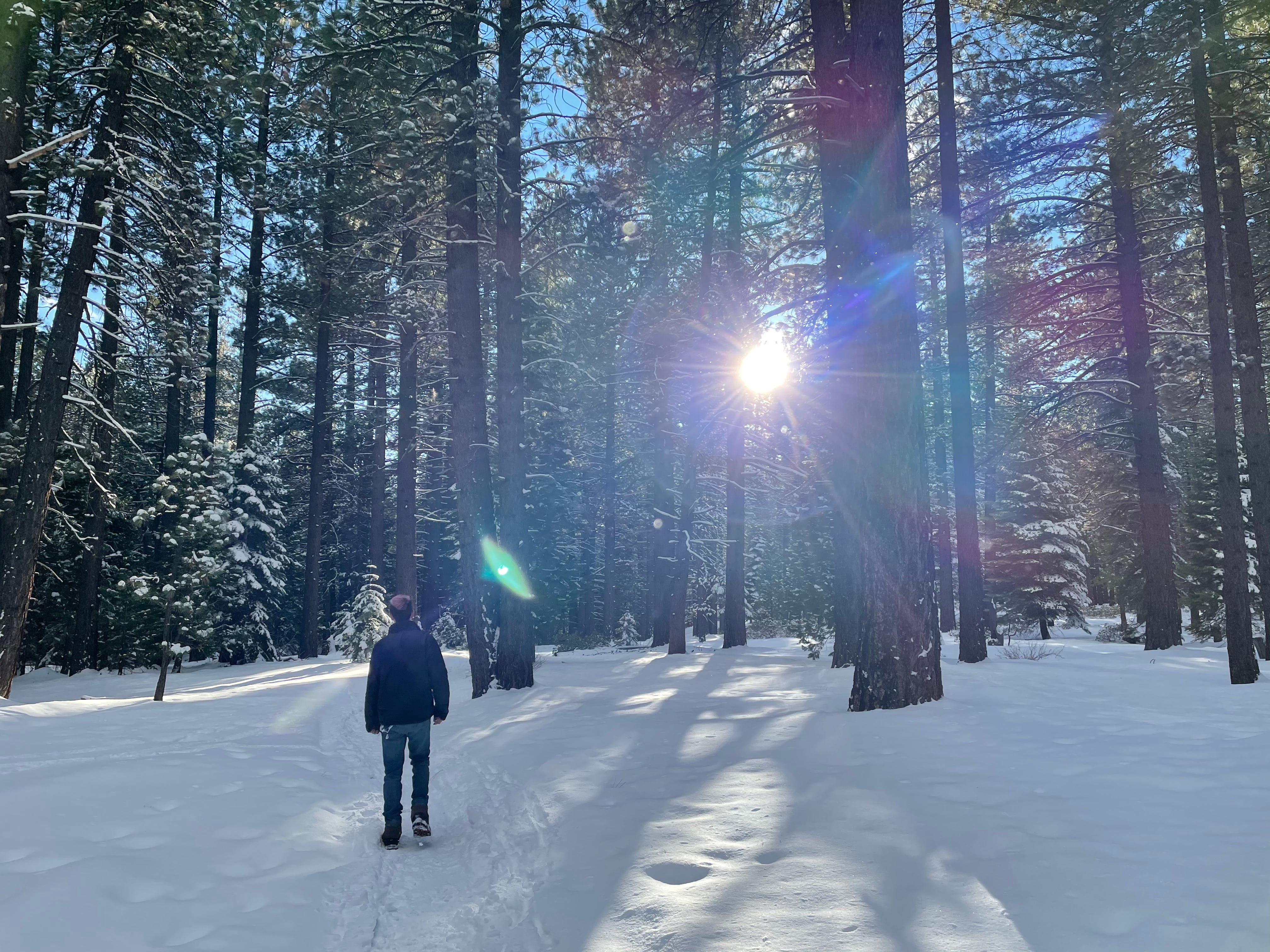 James continued making things. Through February and March he worked on a mosaic crocheted shawl. 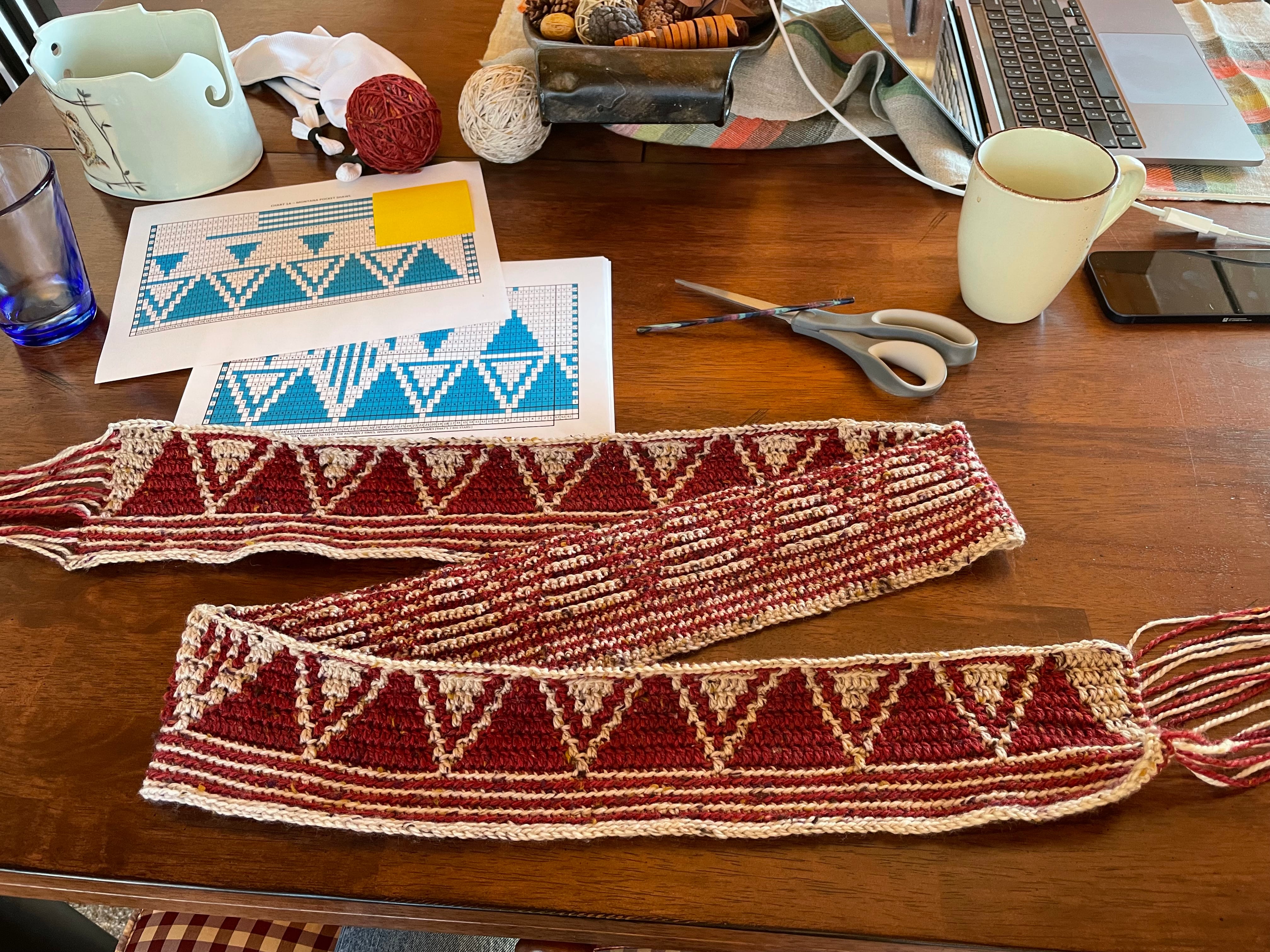 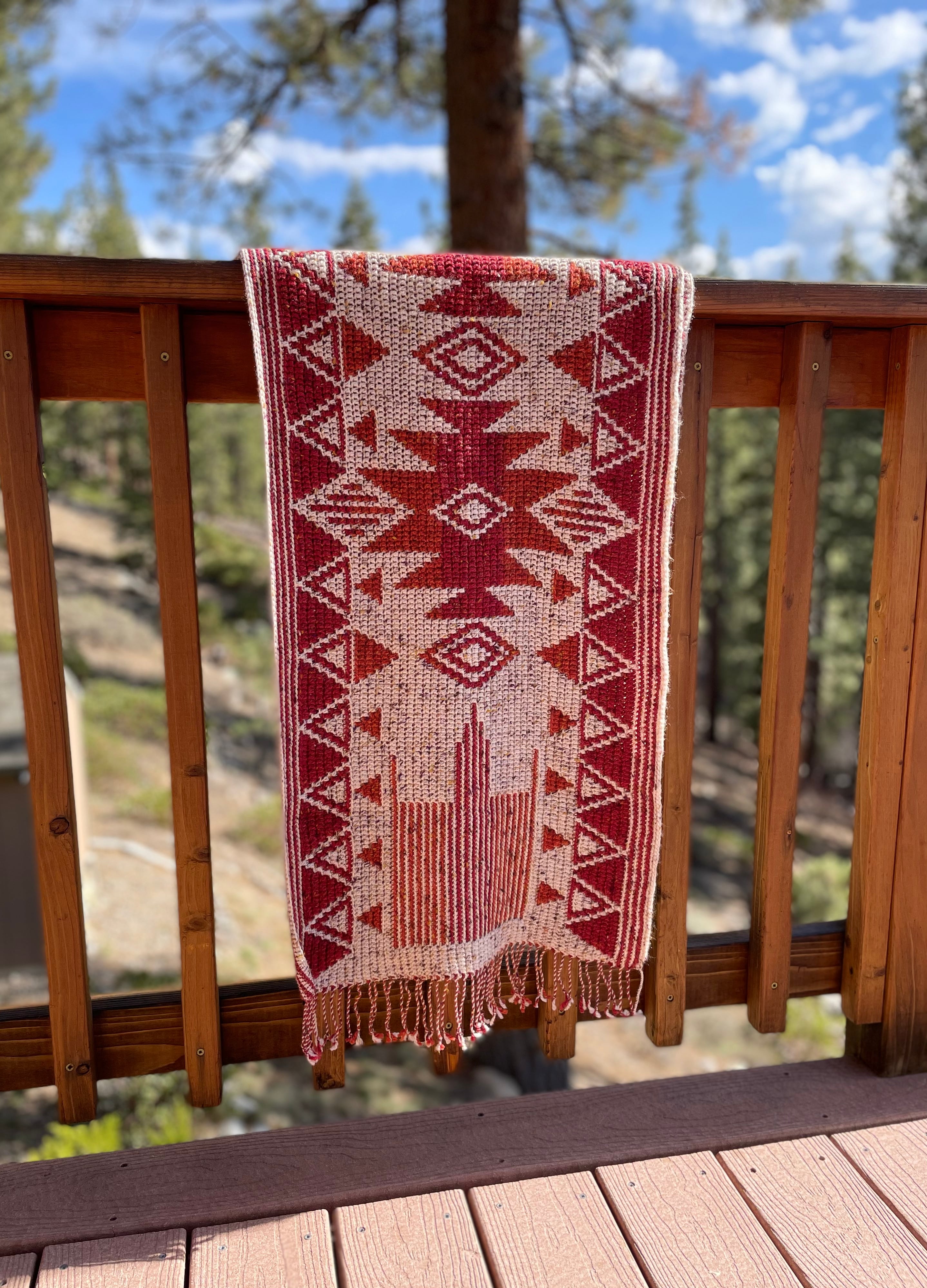 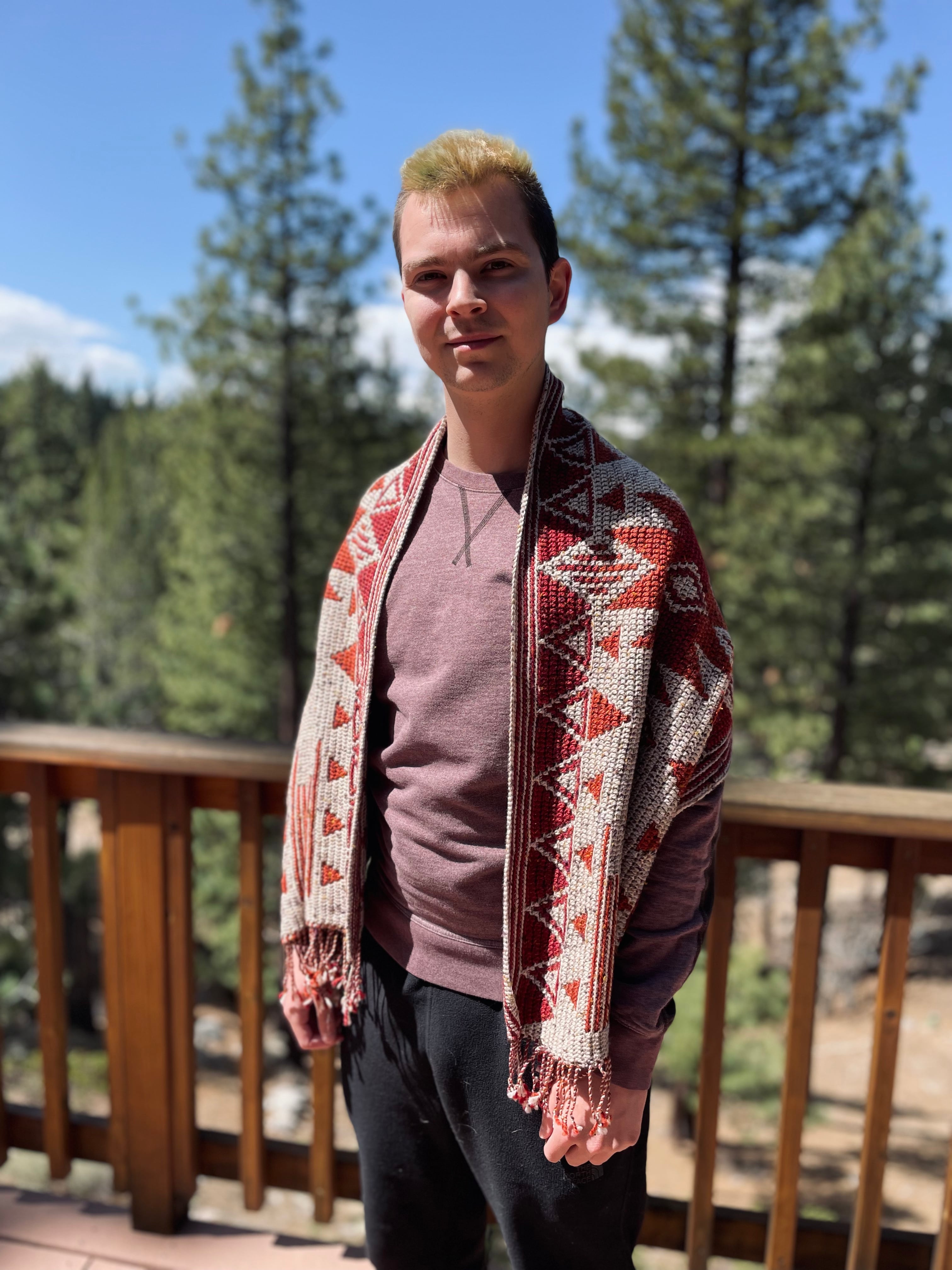 March brought with it the end of ski season, and coincidentally Myke’s birthday.

Moving into April the snow started to melt, and the plants started to come back. 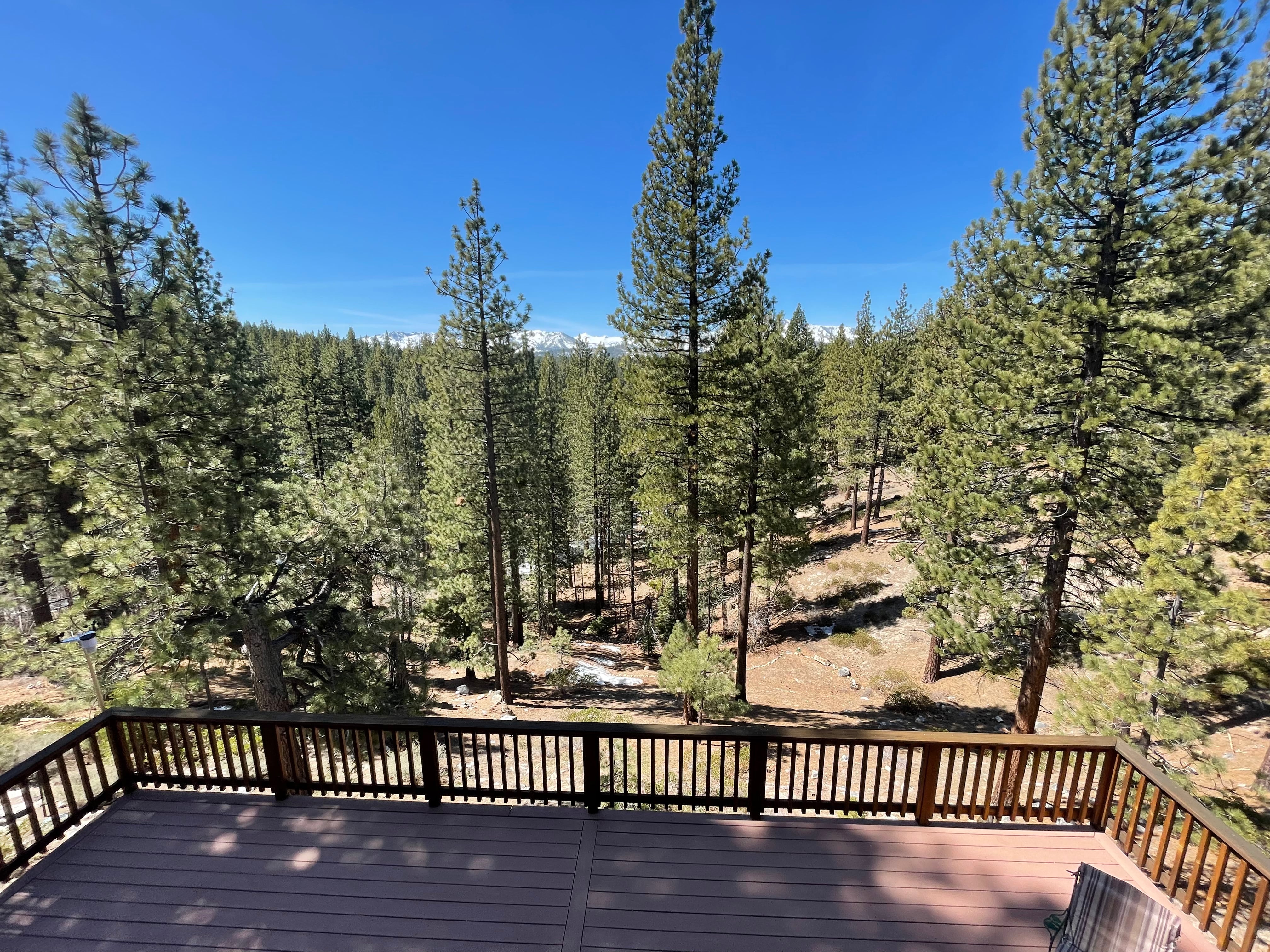 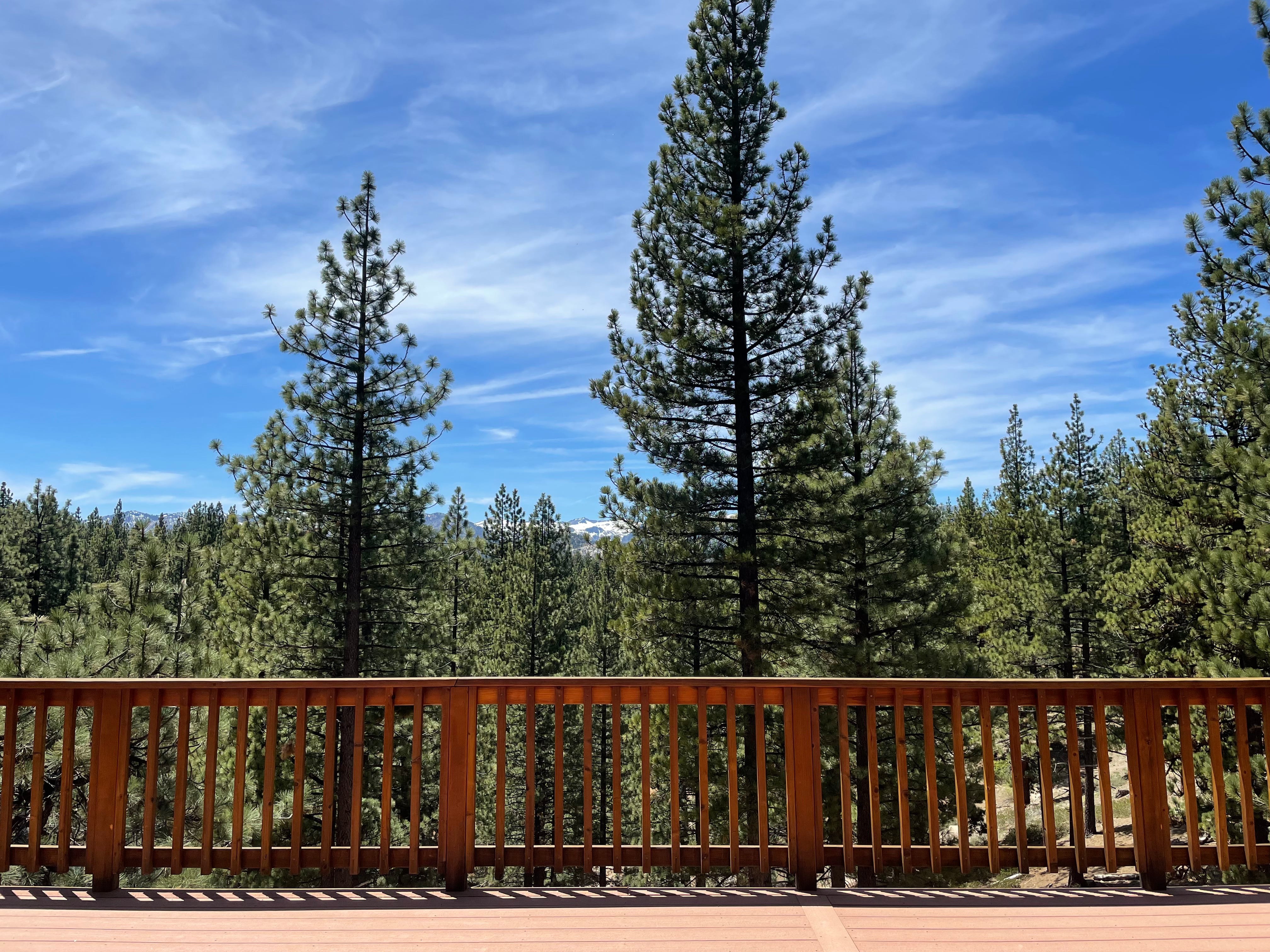 We also got to work making some changes to the place. We had ordered bunk beds back in December of 2020, but due to long shipping delays they didn’t arrive until early May. 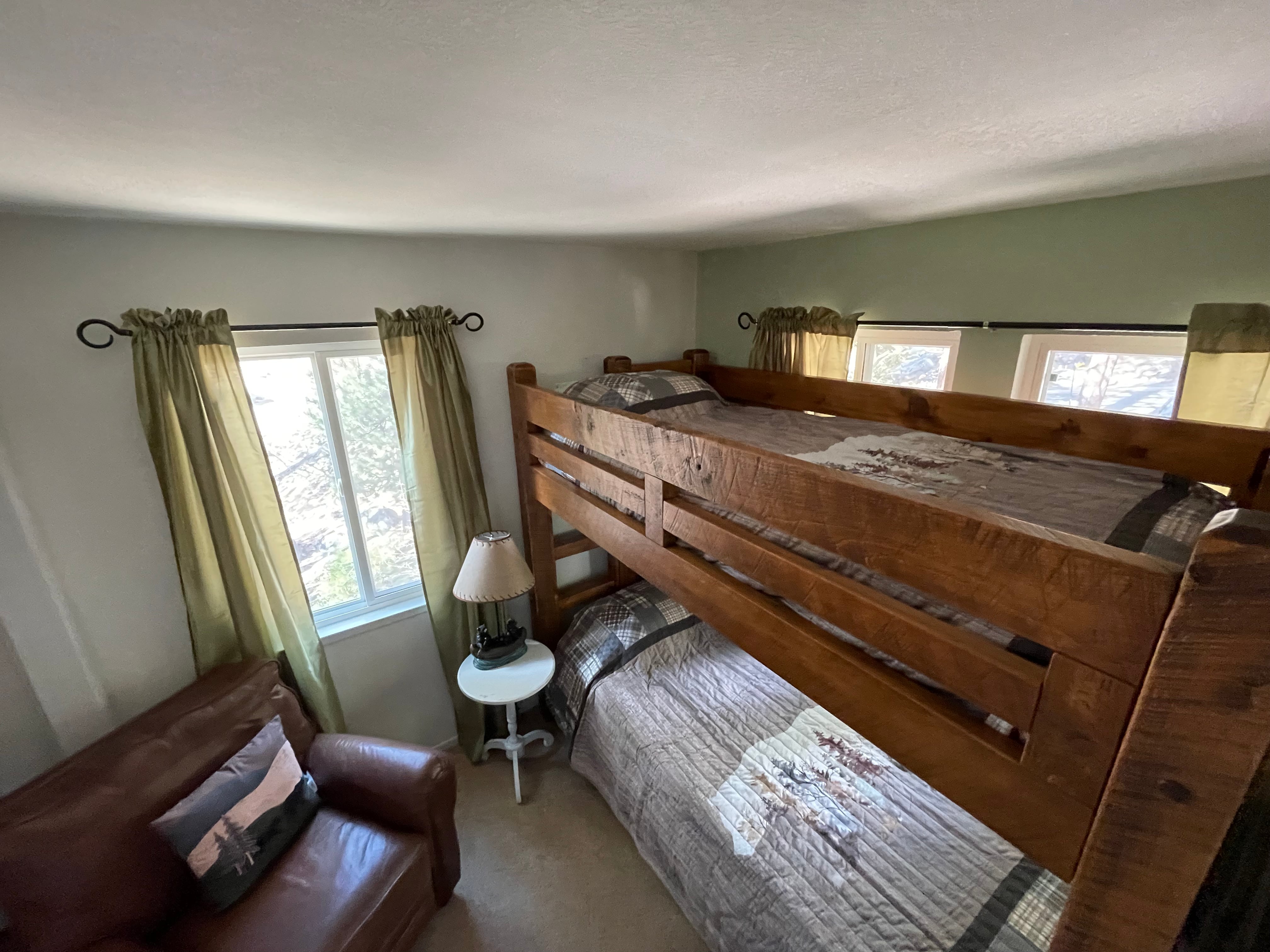 We also put in an order for a hot tub back in January, which was quoted to arrive in March, but was also delayed until May.

We also got to see some of the local wildlife, including a bobcat who stopped by to sunbathe outside the office window one day. 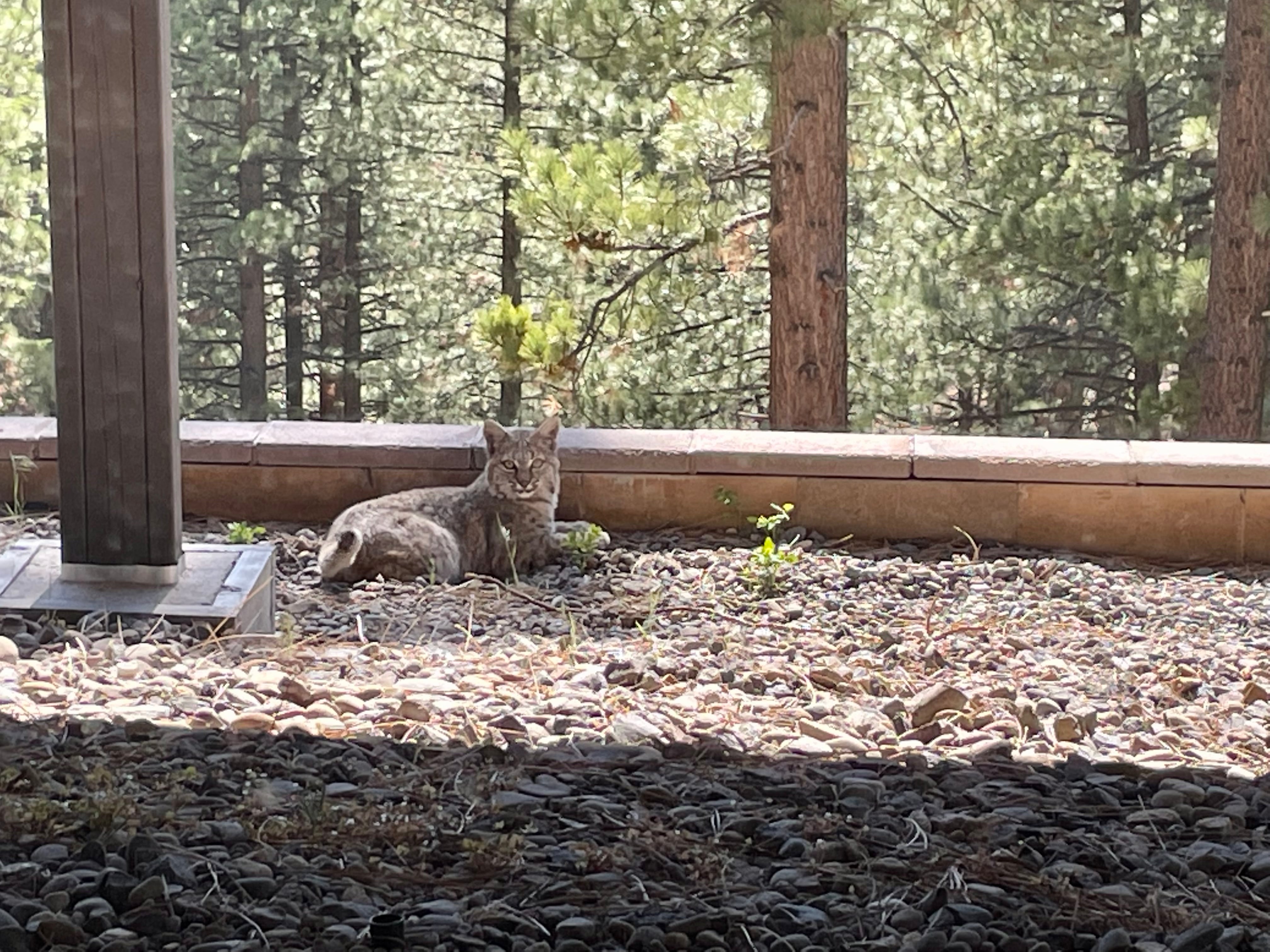 Of course the biggest, and most exciting, purchase (for Myke) was a boat to take out on the lake. Myke found a 2019 Yamaha 24’ jet boat for sale in Temecula, CA—a short 470 mile drive from us—which we drove down to look at over a weekend. It was in brand new condition and a perfect color. After a thinking about it for a few minutes, “Blue Bear” was welcomed into the family.

The summer went on without much eventful happening. We had a few friends up to take out on the boat and try out the hot tub with us, and we went back to San Jose every other month to check up on things, all while finishing up our work on the new software releases.

In July our families came out to visit us at the lake. Myke’s family arrived first, coming the week before our wedding anniversary. It was great to finally see everyone again after missing Christmas and a whole year of holiday visits, and also to show them Lake Tahoe, which they hadn’t been out to visit before. We took them out on the boat, played video games at home, and even got to take Myke’s dad on his very first camping trip! 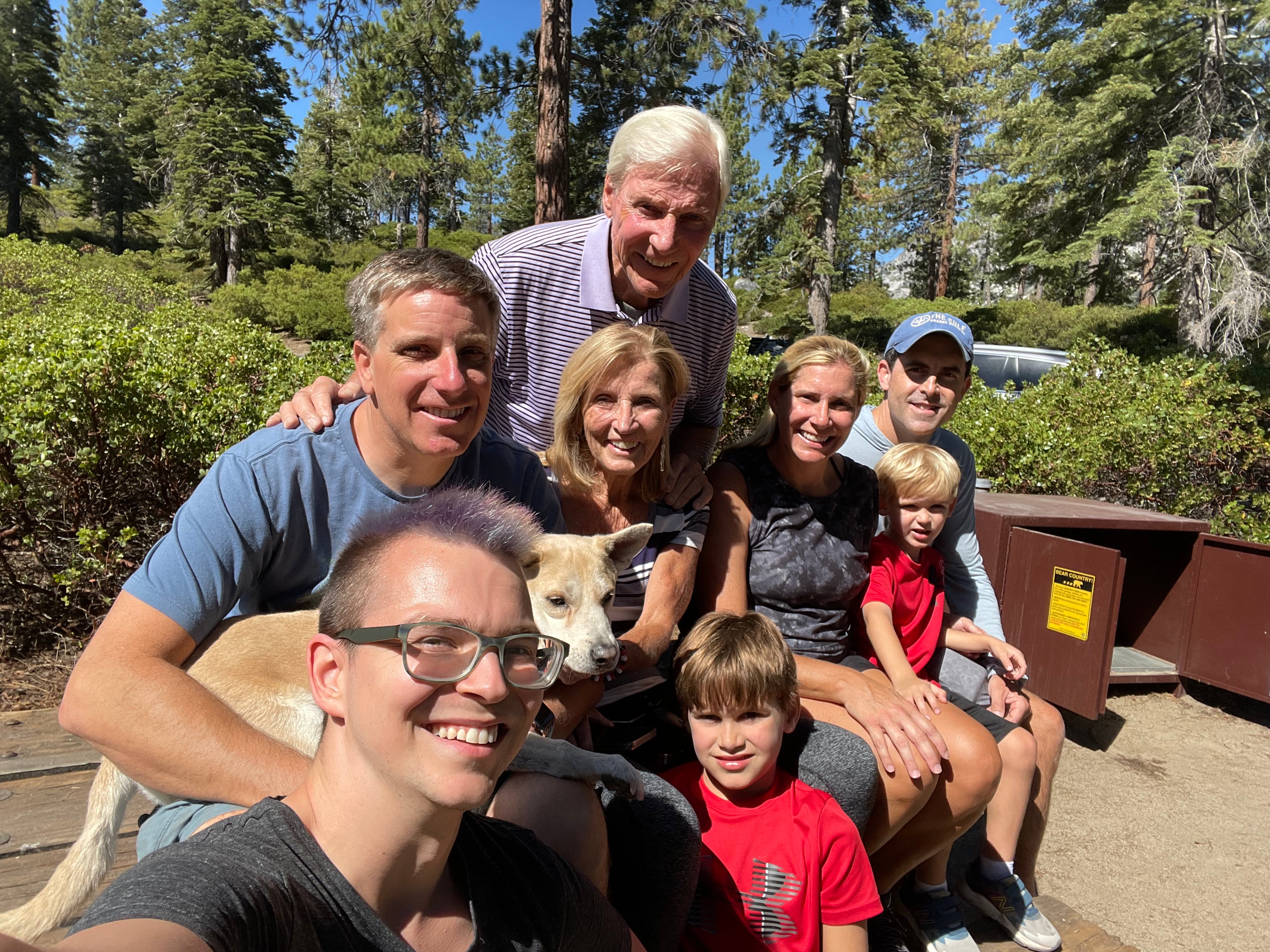 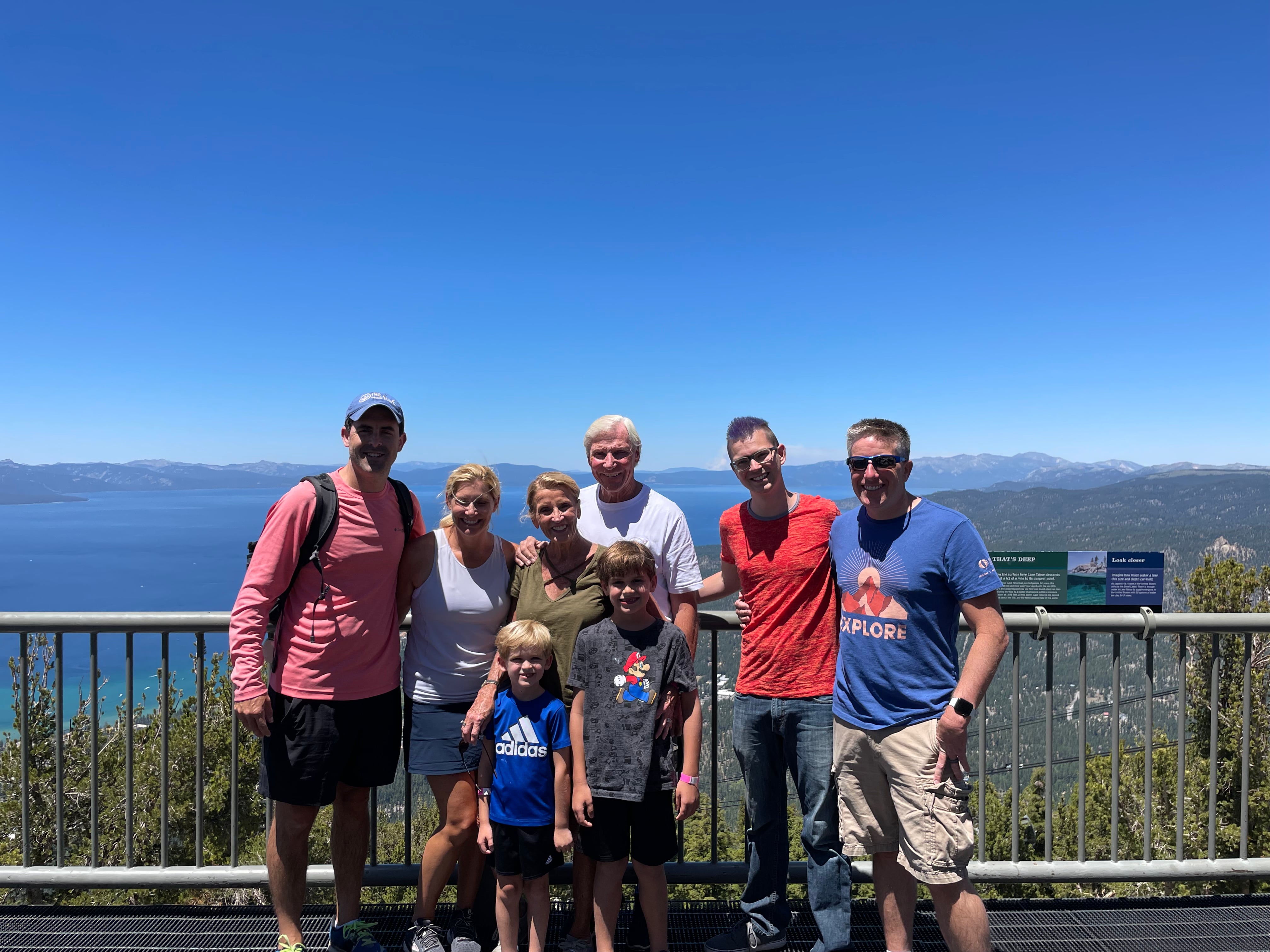 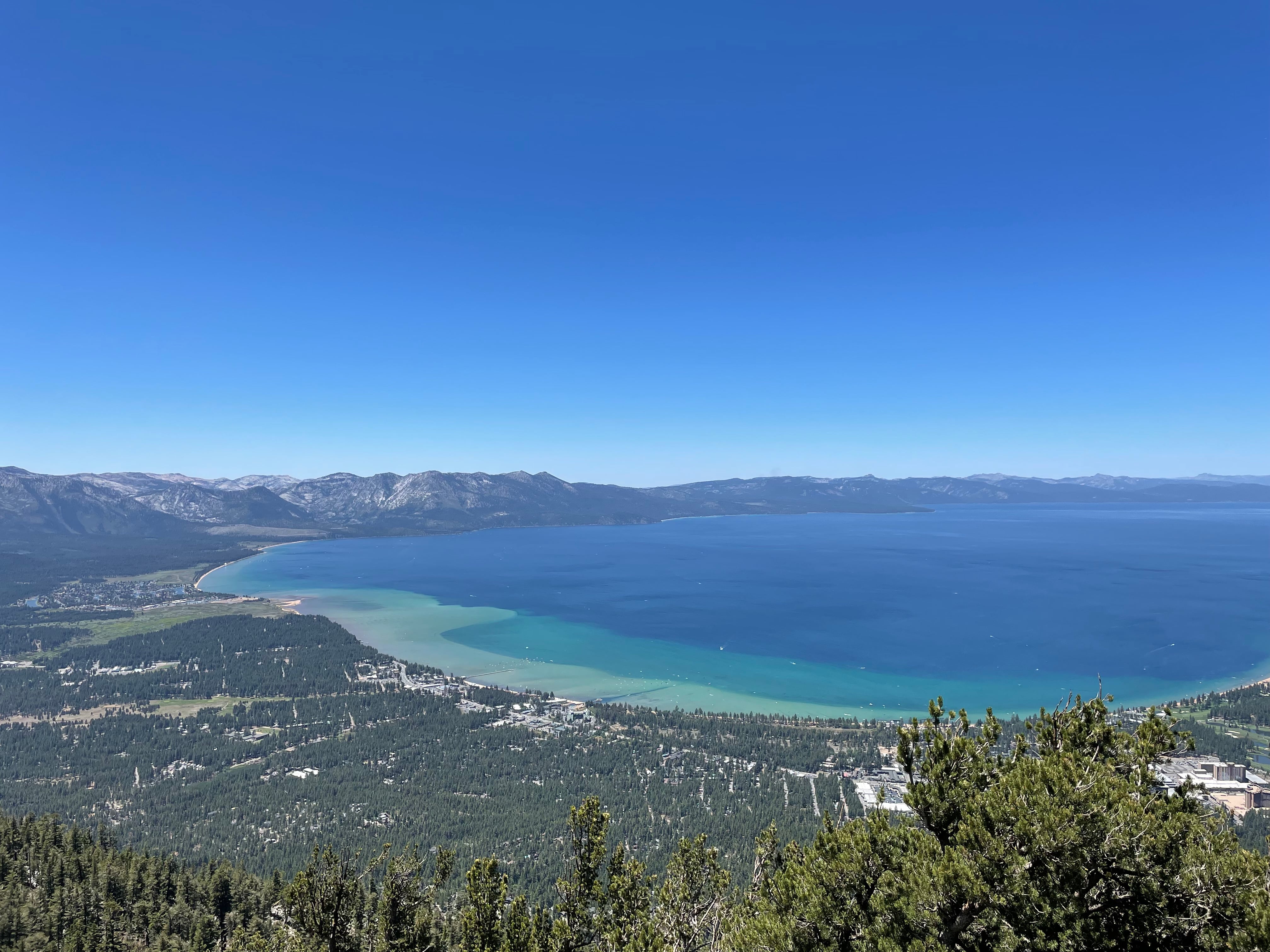 After staying with us for a few days, we migrated up to Incline Village for our anniversary. We’ve got a whole photo gallery for that though, so check it out if you haven’t.

Our first wedding anniversary at Incline Village, where we finally got to have the party we postponed due to COVID-19. If you’d like full-resolution copies of any photos you’re in, just text us. 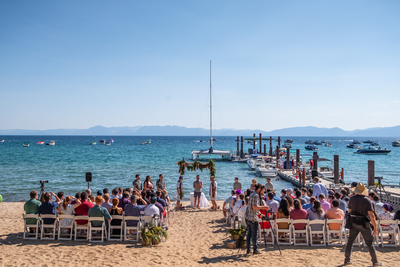 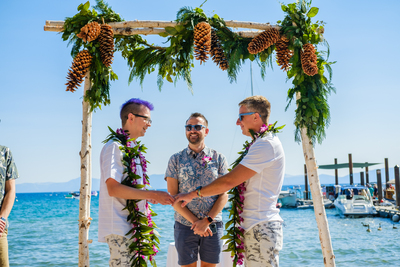 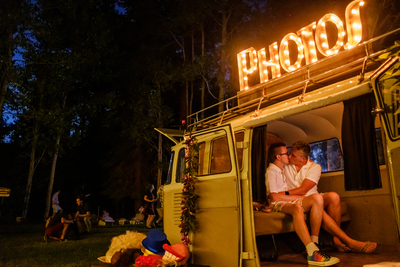 If you didn’t already hear the story, we also had another surprise that weekend. Late on Friday night we got a call from our neighbors that they noticed we’d left our refrigerator door open. This was odd, since that didn’t sound like something we would do on accident, so we asked if they’d go and close it for us. They followed this up by calling us back and letting us know that something had clearly broken in, as there was food all over the floor. So we hopped in our car and drove an hour back down to South Lake, where sure enough our side window had been forced open, and a bear had helped himself to a bunch of food from our fridge, before leaving. We realized we had left the window cracked open while trying to cool off the house, so the bear hadn’t gotten in all on his own, but it was still a bit more excitement than we wanted.

After the anniversary party James’s family came to stay with us. We also took them out on the boat, showed them around town, and took them for a gondola ride up the mountain; but no camping trip this time.

We didn’t get in nearly as much camping as normal this year, but did have a few nice trips, including one up to Napa in September.

As we headed into fall, we experienced our first wildfire evacuation order from the Caldor fire. While our place was fine, 221,775 acres of forest land burned. Fortunately we had left Tahoe a week earlier, as we were heading to Iceland for our first vacation in two years, accompanying our friends Jeremy, Jillian, and Harris. We had a great time seeing waterfalls, mountains, sheep; and especially enjoying the natural hot springs.

This year we took our first real vacation in several years to Iceland, with our friends Jeremy & Jillian (who planned most of the trip), and Harris. It was the first time for either of us, and we had a great time discovering the country. The scenery was brutal and breathtaking, with huge waterfalls, fields of lava rock and grass, mountains, and glaciers. 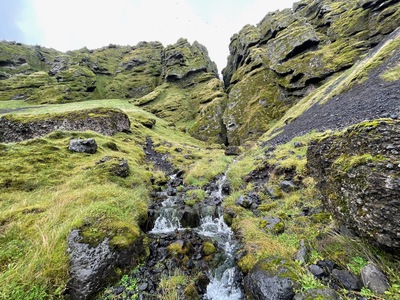 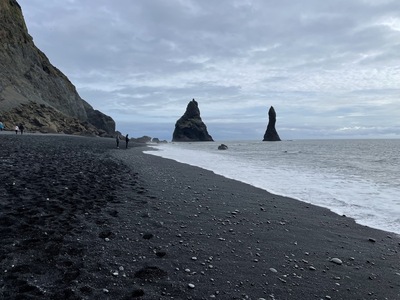 We also made a short trip back to Ohio to see James’s Grandpa, who couldn’t make it out for the anniversary.

When we returned we still had to wait a while until we’d be able to go back to Tahoe. The evacuation order had thankfully been rescinded, and the fire contained, but the highways were still under heavy construction while debris were removed and repairs made.

Mid-October we headed back to Tahoe though. Myke was sure to get in as much time as possible on the lake, but by the end of the month it was time to take the boat out and have it winterized.

Fall brought with it colder weather, which is also great for hiking. One of our favorite hikes is Mt. Tallac trail for it’s great views for Lake Tahoe and Fallen Leaf Lake.

We decided to skip traveling for the end of year holidays again this year. Instead we had a small Thanksgiving dinner with some local friends and our roommate Geno.

While our bears go to sleep in the winter, the coyotes don’t. We caught one on the security cameras after noticing footprints in the snow.

James also finished the year out by making a few Christmas presents, including hats, socks, and a wrap for his sister-in-law. 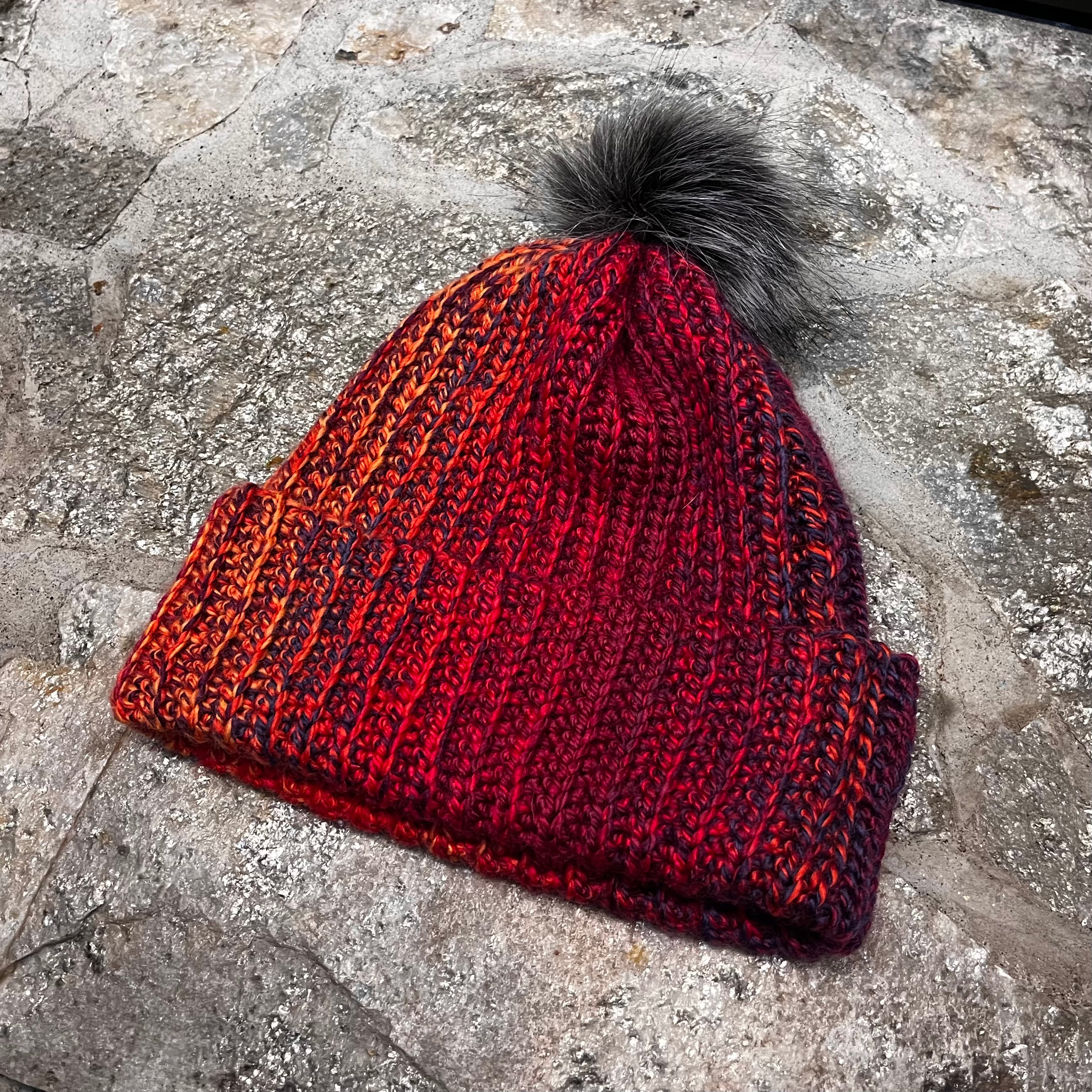 Speaking of snow, December set a new snowfall record for the lake, with as much as 212-inches in some places. While we certainly hope this will help with the drought, it was a lot to keep up with. The California DOT had trouble keeping up with the snowfall too, and we actually ended up snowed in over Christmas because the roads got so bad.

The storm did finally blow over, and now we turn to cleaning up the snow and hoping for good things in the new year. Hopefully wherever you are you’re staying safe and healthy, and we wish you all the best.